Courtesy of the Asbury Park Press:

It didn't take long for Schiano to be asked Monday whether he recruited Brown out of Red Bank Catholic. Schiano said he did, but noted he never offered Brown a scholarship.

"We had contact with him, we mailed to him," Schiano said of Brown, who haunted Rutgers with a 154-yard performance in the Huskies' 38-19 win last November. "In the end we decided to go with other players that were pretty darn good as well, one of them by the name of Ray Rice. But Donald is a tremendous player."

Oh. I guess that's OK, even if "mailing him" is merely a recognition that indeed, Donald Brown - from about a half-hour down the Parkway from Rutgers - was a real, live football player. I mean, Ray Rice was pretty good. He's the best player in Rutgers football history, he had over 2,000 yards, and no one in the Big East could ev- wait, Mr. Journalist? You have more to say?


Midway through this season, Brown, who redshirted as a freshman, is on pace to join Rice as the only 2,000-yard rushers in Big East history.

Well, I mean, you can't fault Schiano too much. Rice was a great college running back, and that doesn't mean the RU head coach can't see talent at the position, just th-

Connecticut coach Randy Edsall was only too happy to land Brown, who rushed for 2,032 yards and scored 27 touchdowns as a senior at Red Bank Catholic.

But then again, this isn't Wisconsin Hate Week.

So this one goes out to you, my Scarlet King: 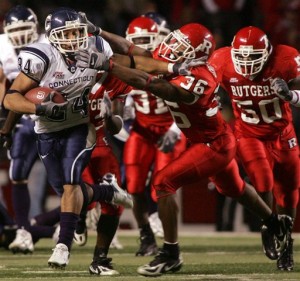