Share All sharing options for: A Great Moment In Rutgers Football History 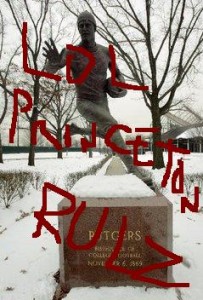 The first in a five-part series.

As a way to educate the fans in Connecticut to the tradition and prowess of the Huskies' opponent this weekend, TheUConnBlog proudly presents "Great Moments in Rutgers Football History."

In this edition, we'll go into the wayback machine, to when horsepower had to do with how many animals you owned, the guy buried in Grant's Tomb was president, and Yankees vs. Indians wasn't a baseball game.

The setup: One week after Rutgers won the first intercollegiate football game in recorded history, the not-yet-Scarlet-Knights and Princeton met for the second time. Rutgers' 6-4 win in the first game put it in a great position to win its first national championship and set the fledgling sport on its way.

The game was big enough that ESPNTelegraph was on scene, sending information out to thousands of Americans not distracted by a presidential impeachment or railroads.

It was a day that college football fans would never forget, at least until Teddy Roosevelt forced the forward pass into the game by clubbing Knute Rockne with a large stick in 1906.

The Moment: Under the somewhat developed rules of the day, the game was nothing like the football you see today. It combined the pointless trainwreck aspect of rugby with the excitement of kicking a round ball past a goalie.

Really, these games shouldn't count as "football," if you ask me. I've already petitioned the National Football Foundation to revoke Rutgers' status as "the Birthplace" of college football. I'll let you know how that turns out.

But, for now, this is considered the second all-time football game.

Enthusiasm at both schools was sky-high. Rutgers, naturally, is also the birthplace of college football heckling, thanks to a professor who yelled, "You will come to no Christian end!" at the Princeton players. This was followed by a middle finger, as would become custom among Scarlet Knights fans.

And on this day, the Rutgers team, fresh off a performance the Daily Targum called "the same headlong running, wild shouting, and frantic kicking," were prepared to make a statement.

For even in 1869, fans were uncertain about whether the Rutgers-Princeton Conference was worthy of a national champion. It was argued that, though these were the only two teams playing intercollegiate football, neither had the speed of a hypothetical league of schools in the southern U.S. Luckily, the U.S. military was running those states at the time, so this argument was thrown out.

As for the game, we don't know a whole lot. Rutgers laid the first of dozens of eggs on the field of play. They didn't score a point against the Tigers, despite only having to kick the ball through a goal. Legend has it that Rutgers' best player, Mickey Teelford, kept passing the ball to Princeton whenever RU threatened the Princeton goal. 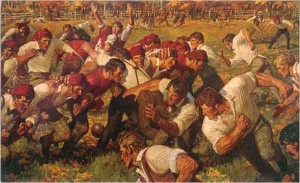 Hey, guys...the ball's over there. Someone should go and get it.

And so the Tigers left the field with a dominant 8-0 victory and the very first national championship.

Rutgers, given a 50-50 shot to win a national championship, came up short. This would be a theme of the next 140 years of college football.

The aftermath: Princeton once again defeated Rutgers in 1870 to finish with its one-game season with an undefeated record and another national title. I argue they had a weak strength-of-schedule, but then they also lit their rooms with gas lamps and candles.

In true whiny Rutgers fashion, the Knights refused to play Princeton in 1871 because Princeton was a big meanie. After continuing the series for decades, Rutgers now once again refuses to play Princeton. Morgan State? Sure. But long-time, in-state rival of similar quality? I'm appalled that tradition means nothing to the Scarlet Knights.

This has been A Great Moment In Rutgers Football History.