This is that story. (Story!)

In the beginning, there was a young kid growing up in the mystical land of suburban New Jersey. And this kid loved football, from his first NFL betting pool at the age of 5.

And yea verily, he one day discovered that institutions of higher learning played football.

And though this young kid had no concept of what "college" was, he was searching for a team to call his own. For you see, his ancestors raised him to root for the Jets of New York, and even at the age of 5, the young boy knew the heartache which would befall him as a fan of the green-clad professionals.

And then, in a scarlet light, Truth was revealed to this boy from on high.

For this was the first time the young man was introduced to the state university of New Jersey when he saw the logo on the side of a collectible plastic cup. It is true that he called it "Root-i-gers" for the longest time. But childish mispronunciations aside, he was now aware of college football, and he began to feel to the first pangs of state pride.

Because he was by now well aware of living in a place called New Jersey, a place he considered much better than the endless nothing to the west and immediate north.

And being a six-year-old boy, that simple reasoning was enough to want Rutgers to win football games.

Unfortunately, they weren't on TV much.

In a state not renowned for its college football, Rutgers was an afterthought. And even when the Knights of Scarlet were above .500 in the early 90s, any and all coverage rarely reached the New York papers he would read each Sunday.

Yea, for the young boy was impressionable, and thus observed the media ignoring his home-state team. With nowhere else to turn, the boy began to slip out of consciousness of the gridiron gang in Piscataway.

And so, in late 1993, when a golden team from South Bend won the hallowed "Game of the Century," he was hooked on a different team. A team that played all its games on NBC4 at the same comfortable time each week. A more Irish, more fight-y team. And though he then held no hostility against his state's university, the future was clear.

As the boy began to worship at the altar of Touchdown Jesus in the middle of the last decade, he began to notice something.

Yea, Rutgers was awful. Magnificently, spectacularly, suck-out-loud awful. And that was OK, the boy decided. His loyalty to New Jersey no longer carried on to the state U. The apathy was too much.

By 2002, the only contact this young man had with Rutgers football came via the ever-more hilarious blowout losses he saw on the local news each week.

And the scores resounded in that young man's ears: 61-0 to Virginia Tech. 50-0 to Miami, 30-5 to Temple! 80-7 to West Virginia. 42-0 to Pittsburgh. And that was just in 2001. The hapless SUNJ team even lost to a half-assed quasi-IAA program from Connecticut that season.

And so, the Scarlet Knight football program was forevermore consigned, in the young man's mind, to that realm of historical jokes, like the inbred emperors of Austria-Hungary, or the French military. And there they would stay.

But 2001 would not be the last this young man would hear of Rutgers. Oh no. For the program would be led by a half-man, half-beast from the providential land of Wyckoff in Bergen County. 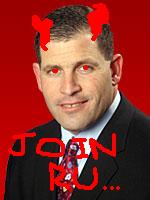 Yes, I have MS Paint. Why do you ask?

This shady character started to build the program, bringing home top recruits from in-state and from his various connections in the football Holy Land of Florida. Milk and honey began to flow down the Raritan River as Rutgers slowly became not the worst team in Division I.

It was around this time the young man was applying to the very schools he had seen have their way with Rutgers for years.

While dozens of members of the young man's graduating class applied to Rutgers, he did not. He looked northward, to schools with mascots designed to look like fruit or a nervous, scared-by-large-crowds dog.

Perhaps he was frightened off by the university's 137 percent STD rate. That's conjecture, and neither here nor there.

When the young man entered the University of Connecticut in 2005, the break was complete. Rutgers would now be the manifestation of evil. But still, until the 2005 season, that evil appeared to be dormant.

In 2005, the annals show Rutgers to be un-awful at football. This surprised, nay, frightened the young man.

He prayed to the heavens that the season would be a simple fluke - a momentary peak after decades of traveling through valleys. He prayed to the Strength of Schedule Gods that Rutgers would be looked on as a joke once more. And a 58-5 loss to Louisville placated the young man.

But the following year, terror struck him. For as The Schiano feasted on the flesh of Ohio U., Howard U., and Piscataway's firstborn, Rutgers became a national sensation.

The New York media, which has never met a knob it could not slob, presented the '06 Scarlet Knights as the sleeping giant of college football.

And the young man knew what was next. For he had grown up around New Jersey sports fans. And he knew that chest-puffing was required of New Jerseyans over even the least amount of success. And sure enough, Rutgers fans morphed from non-existent to loud, obnoxious, and ready to express 30 years of frustration during RU's ascendancy.

It seemed to the young man that the End Times, a time where Rutgers could be looked on as a legitimate contender for anything, were upon him.

Which led to Nov. 9, 2006. A date that, like Dec. 7, 1941 or Oct. 20, 2004, would live in infamy in the young man's life. For it was then that Rutgers beat No. 3 Louisville with a stirring 18-point comeback. And he could feel celebratory collars being popped, hair gel being emptied by the gallon, and mega mixes were being pumped at Crowbars everywhere (nsfw).

Then the following week Mike Teel throw 10 interceptions and Cincinnati beat the undefeated Knights, 30-11. And there was much rejoicing.

And when West Virginia stopped a two-point conversion to deny Rutgers a BCS bid, a celebratory feast of boneless buffalo wings was held in honor of Mountaineer Man.

Yeah. This was sweet.

And since then, every RU misstep and foible, every QB-slapping-fellow-player or losing-to-Navy moment, adds to that young man's enjoyment. He reveled in Rutgers' 1-5 start in 2008, even as he secretly feared the horror that would occur if the Scarlet Knights were to upset his beloved Huskies on the field of play. But that is another story.

Oh, and what about that young man? Where is he right now?

Well, he saw dead people the entire time because he was dead. Mind. Blown.