State Of The Big East: Week 7

Share All sharing options for: State Of The Big East: Week 7 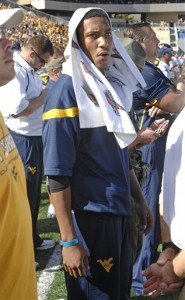 Is a close win over Syracuse better than a loss to Toledo? I leave that as an exercise to the reader.

Wherein we take a panoramic look at the conference that's electrifying crowds from the northern Mid-Atlantic to southern New England. Also Tampa.

Wait, what? I take a one-week nap and there's a third guy writing? Well hot damn.

So I took a bye week from the blog, and not a whole lot's changed in the Big East universe. The teams that suck still suck. By which I mean every team sucks.

This will be my last post before Rutgers Hate Week begins in earnest. I don't exactly have a plan for RHW, but rest assured that it will reference the Player Hater's Ball more than enough times (What can I say about Greg Schiano's suit that hasn't already been said about Afghanistan?).

But in this week's edition of State Of The Big East:, we'll learn all about:

Now that Cincinnati opened its conference schedule, everyone has played at least one Big East game. Over the next seven weeks or so, we'll start to see the knock-down, drag-out affairs that have made the Big East the nation's Northeast's most exciting only Division I-A football conference.

But this week, three teams had byes, and Louisville played a non-conference game on Friday. So slim pickings with the results this week.

You know, if I thought next Saturday's UConn-Rutgers game could 1) make UConn bowl-eligible and 2) officially knock Rutgers from bowl contention, I would've booked a hotel in Piscataway, put some champagne on ice and had a good time.

But that's where we are. The Scarlet Knights drop to 0-5 against I-A opponents, and have the exact same record as Syracuse. Still, I don't want to make it seem as if Rutgers is as bad as Syracuse. Yes, they've only beaten Morgan State, but they have three losses by 7 points or less. Maybe this is karma for Jeremy Ito being a punk (at 1:40), but eventually Rutgers is bound to make that one big game-winning play, right? I honestly fear that it'll happen next week.

As for Cincinnati, well, it's a win. They'll take it. And they'll have a nice week off to get all healed and whatnot, before taking a trip up to mighty Rentschler Field in two weeks.

"What offense can’t score three lousy points in one quarter? An offense where the line decides to take a quarter off, and one where Mike Teel and Tiquan Underwood are having miserable years."

I couldn't seem to find a Cincinnati blog. I found a DePaul blog, but not a Cincinnati one. That seems wrong.

Oh my. Well, yeah, Pat White was out. But oh my. Syracuse was just a few yards away from pulling a Krags on West Virginia, until a 4th-down pass from Cameron Dantley fell incomplete. Noel "mini-Reggie Bush" Devine ran 92 yards to put the game out of reach.

Well, Jarrett Brown (14-20, 52 yds, TD) apparently is also not the right quarterback to run Bill Stewart'weird, unproductive hybrid offense. The 'Eers averaged less than four yards per carry outside of the 92-yard run. Against Syracuse.

The Orange lose another game on the road to Greg Robinson's New Orleans funeral later this season.

"We the fans booed a lot today. Probably more than you have heard in your time at West Virginia. But it's important for you the players to know that we weren't booing you. We were booing the coaching staff. Yes, Syracuse was playing inspired ball today. But they were still the same Syracuse team we've watched all year long. It was easy to see from our vantage point that the play calling on offense was somewhere just below painful. We would be surprised if OC Jeff Mullen doesn't give his pay check back this week. Because he didn't earn it."

And nothing up yet from blog favorite Troy Nunes Is An Absolute Magician. That's too bad.

Hey, it's just like Louisville was in Conference USA again. Crappy opponents, high-scoring, not too much blowy-out-y. But thanks to a couple wacky defensive/special teams touchdowns, the Cardinals are back above .500 with a non-conference game against Maryland-killers Middle Tennessee. At least the Big East can still say it is, without a doubt, the seventh best conference in the country. Take that, WAC!

"It’s a win, but don’t you feel a little dirty celebrating it? This is a sub-.500 Memphis team that just took the Big East Cardinals to the brink. Don’t let the 3-3 record fool you, two of those wins are over I-AA teams (I don’t care what it says about Arkansas State… it’s a typo). If not for a smorgasbord of lucky breaks, Louisville gets run out of the building by a gimmicky C-USA offense."

After getting some very nice comments from other Big East fans with the comparisons to The Office last week, I've decided to be daring and do nothing of the sort to draw any readers in. It's early Monday morning. Sorry.

So that'll do it for Week Seven in the Big East. Fret not, because before any of these games are played, Midnight Madness will have passed us by, and thus we can start worrying about those annoying little Catholic schools in the non-football half of the conference.

As Diddy said in Nas' "Hate Me Now," Basketball season has returned. (I swear, I thought he said that until about 30 seconds ago when I looked it up.)

Yes, I do plan on doing a condensed version of this for basketball, but that'll take a backseat until the football league cools down.

So until Rutgers Hate Week, see ya.