The month-old cream rises to the top

Share All sharing options for: The month-old cream rises to the top 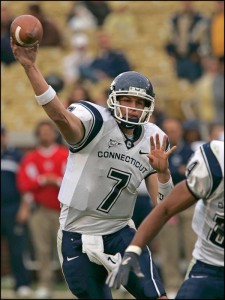 The UConn messiah is preparing to take over the NFL, and the greater Detroit area.

Things are looking bleak for Jon Kitna and his ailing back, according today's article in the Detroit Free Press, so Dan O. is almost a lock to get his first career start for the Lions at the Vikings tomorrow (1 p.m.).

Although Kitna and the coaching staff aren't saying much, the NFL's biggest party animal missed the last three practices and is listed as doubtful.

Coach Rod Marinelli is being Randy Edsall-esque and giving vague answers, but his comments on whether Kitna would start even if he was healthy are a bit intriguing:

"I can't answer that for you right now," Marinelli said, per the Free Press. "I don't want to tell you something and you guys write it and I made you wrong. I'd rather just keep going and wait till Sunday."

Check back for an update tomorrow.

UPDATE: Big D's getting the start.