Share All sharing options for: The story behind UConn's new war memorial. 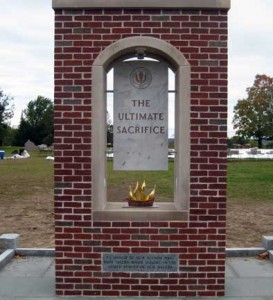 Visitors to UConn's campus have likely noticed a new edition near the Wilbur Cross building in the last few weeks -- a war memorial recognizing UConn alumni who have died while serving in the military. The memorial features a marble tombstone inscribed with the UConn seal and the words "The Ultimate Sacrifice." There is also a plaque that says, "In honor of our alumni who have fallen while serving in the armed forces of our nation."

For the full story on the memorial and its origin, check out the jump.

The memorial itself is the brainchild of UConn alumnus Myles Martel ('65). In June of 2007, Martel was visiting the campus and noticed the flags were at half-staff. When he was told that it was to honor a UConn alumnus who had died in Iraq, he asked if there was a memorial recognizing members of the UConn community who have died while serving in the military. When he was told there was no dedicated memorial, he, along with the help of the Alumni Association, started a movement to create one.

Martel said the design of the memorial is intended to compliment the Wilbur Cross building and fit in with the overall aesthetic of the campus. In addition, the marble used to create the tombstone is taken from the same quarry that provided the marble for the Lincoln Memorial and the tombstones in the Arlington National Cemetery in Washington D.C.

The memorial, which was funded through donations, will be officially given as a gift to the university during a ceremony on November 10, the day before Veteran's Day. Martel said he was "thrilled with the outcome and I feel that the memorial is a fitting and lasting tribute to our fallen alumni."

The physical memorial is only part of a larger effort to recognize alumni who have served in the armed forces. The committee that ran the memorial project is currently working on creating a "Roll of Honor" which will catalogue and make available on a dedicated web page the names of every UConn alumnus who has died while serving in the military. No such list currently exists. Martel said the effort would be coordinated with the Dodd Center and encouraged anyone with information about fallen alumni to contact Betsy Pittman at (860)-485-4507.