Nate Miles or: How UConn learned to start worrying (more) about Stanley Robinson

Share All sharing options for: Nate Miles or: How UConn learned to start worrying (more) about Stanley Robinson 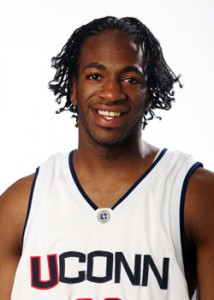 The Nate Miles era came and went before he ever put on a UConn uniform. He may have been a star or a total bust. By most accounts, he was an extremely talented player, but then again, according to Billy Packer, Ajou Ajou Deng was the best player on the '99 Championship team. The point is, the only thing that is certain about Miles is that he is no longer a Husky. But what does that mean for the rest of the team and the season? Well, as we see it, it means three things:

Explanations after the jump.

The most immediate impact of Miles' expulsion (besides the fact that he is gone) is that it immediately fixes UConn's scholarship mess. In short, NCAA rules allow the school to have 13 scholarships. However, with five new recruits (including Miles) UConn would have had 14 scholarship players. The problem would have reared its ugly head in December when both Stanley Robinson (who is taking the semester off) and Ater Majok (a highly-touted recruit coming from Sudan via Australia) are expected to join the team. Now, UConn won't have to deal with a messy logjam that didn't have a clear solution. Instead, UConn gets a highly-touted wing who is ultimately an unknown quantity in Majok (sound familiar?) and a highly-touted wing who is as inconsistent as he is promising. UPDATE: A commenter pointed to David Borges blog which says the scholarship situation isn't fixed, as Miles' scholarship still counts against UConn; leaving them one spot short. However, according to Borges it appears Robinson may be able to pay his own way come second semester, so the situation could still work itself out in a few months, and UConn really needs it too.

Which brings us to the second point, UConn starting to operate like an NBA team. How? By acquiring two valuable mid-season pickups. Marcus Williams' situation in 2006 season non-withstanding, college basketball teams are basically stuck with the same roster from November to March. Not UConn though.

Robinson and Majok won't be here until at least mid-December, but judging by the schedule, that won't be a huge loss. Before January 1, UConn faces its typical cupcake schedule filled with the Western Carolina's and Hartford's of the world, with the only real landmines being Gonzaga and Georgetown. The team appears to be deep enough that they can try to fill the hole for a few months with a combination of Jerome Dyson and new-comer Scottie Haralson or even by occasionally going big and sliding Jeff Adrien down into the small forward spot.

On Day 1, UConn will essentially have a point guard, shooting guard, power forward and center that could play for just about anyone in the country with Price, Dyson, Adrien and Thabeet and if they can survive to January (which they will) they will be able to plug in two new and energized players at the team's one weak position.

However, that means that if UConn want to grab a third national championship, Robinson and Majok are going to have to be able to fill that hole when they show up. Again, Majok is an unknown, so until he is actually in Storrs, we'll just focus on Robinson, who has spent the last two years exciting UConn fans with his incredible promise and ability only to deflate them in equal measure by simply disappearing. It seemed at times that the only thing he could do consistently was be inconsistent.

The good news is that UConn was 14-4 last year when Robinson scored more than 10 points. The bad news is that the Huskies didn't play 18 games last year, they played 33. If Robinson, who has taken the first semester off to resolve personal commitments can rejoin the team and score the 15 points he is capable of night in and night out, UConn will be a great team with 5 fantastic starters and a legitimate shot at the national title. If he shows up and puts up 15 points one night and then three the next, UConn will merely be a good team that is one player away from real success in March. UConn better hope it does not come to that, because if it does, a lot of people will say that one player is named Nate Miles.