Share All sharing options for: First Person To Blame Zach Frazer Gets Punched 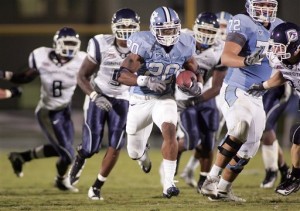 Well, I guess I'll keep this short, because there's not a whole lot to take from last night's game.

UConn looked like 2006 UConn out there. Awful special teams, mediocre offense, a defense looking better in the stats than it played on the field.

Since UConn's current era of being largely OK in the greater scheme of things began in September 2007, this is about as poor an all-around performance the Huskies have put in.

It was eerily similar to the 66-21 loss to West Virginia in the Big East title game last year, except UConn looked competitive in the first half of that game.

Let's try a little football analysis today. That, plus why Zach Frazer will be just fine, after the jump.

If I had a full day, I could break down every play thanks to ESPN360.com's replay of the game, but there's two points I want to make from these stats:

1) Football is such a situation-based game that the stats can be meaningless. UConn simply did not move the ball on first and second down, and it set up 3rd-and-longs the entire night. UConn had two 3rd downs of less than 7 yards in the second half; a 3rd-and-3 failed on a silly pass call, and Donald Brown picked up a 3rd-and-2.

True, the Huskies converted a 3rd-and-13 (and nearly a 3rd-and-18), but no offense can ever count on picking those up.

Even with the three inexcusable blocked punts, the game was there for UConn's offense to take it. But 2.5 yards per play on first down is just not gonna get it done.

2) This is much more nitpicky, but the playcalling is still way too conservative for my liking. It wasn't until UNC had a 26-point lead with about 3:00 left that Frazer threw what I would consider a vertical pass. The gameplan was still all slants, hitches, screens, and WR-screen-type passes.

In my way of thinking, you solve a couple problems by letting Frazer air it out. One, you reduce the chances of Frazer making a silly decision by staring down a receiver in traffic (that would be interception #1). Two, a deep ball (especially off a playaction fake), must make the safeties pay attention to UConn's wideouts. That's one less person to stop Donald Brown, who had a terribly misleading 161 yards.

I know someone will tell me I'm wrong on that, but that's my impression from last night.

And at worst, what happens? You throw an interception 40 yards down the field? That's pretty much a punt, and it would have worked out better than the Huskies' actual punting game did.

Offense wasn't the key to Saturday's game. The real key, of course, was the three blocked punts and seven penalties which set up 14 of North Carolina's 17 first-half points.

There's not a whole lot to say about that. It sucked.

But the defense seemed to lose its intensity after Shawn Draughn ran a simple trap play up the middle for an untouched TD. That was discouraging. The Tar Heels averaged a yard more per play than UConn despite running 30 fewer plays.

On the plus side, UConn lost to UNC by less than Rutgers did.

Were there any positives? Sure:

His second interception (the one dropped by Kashif Moore) is on the receiver, although Frazer needs to learn to put some touch on those checkdown throws. That thing was whipped in there at 80 mph.

The first interception, as I said, was due to him staring down a receiver in traffic, Lorenzen-style. That's worriesome, but can be worked on.

The interception returned for a TD by Marvin Austin...the less said about that, the better. Rookie mistake, and Edsall will hammer the phrase 'take the sack' into young master Frazer's head.

But on a few drives, UConn actually looked like a decent college football offense that is not solely reliant on Donald Brown.

The Big East title wasn't lost today. (Although I think it was lost Thursday, but I'll get to that in the State of the Big East tomorrow). There's still everything to play for. And hell, we'll get UNC back in the Final Four (men's or women's, or both).

So let's chalk this one up to 'learning experience' and move on, kay?