Share All sharing options for: Belated State Of The Big East: Week Five 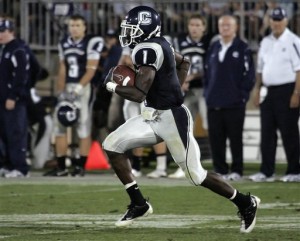 Truthfully, I don't know what Darius Butler is doing here. Maybe it's a kick return, a run-after-catch, or running into the locker room so that he can take a damn break. Either way, he's ridiculous.

Wherein we take a panoramic look at the conference that's electrifying crowds from the northern Mid-Atlantic to southern New England. Also Tampa.

Howdy, y'all. Welcome to the second straight edition of State of the Big East. Yeah, I'm shocked we've made it to Edition #2, too. It's a little later than I'd like to have it out each week, but ah well. Now, my predictions are one or two days away from being totally invalid, instead of four or five. Deal.

In this week's edition, we'll once again go around the conference, taking a deep look at all six games from the past weekend. In addition, we'll all have fun along the way as we learn:

Well, it's finally October, which can mean only one thing: baseball conference play in college football. And indeed, the Big East began its league play last week with a couple of compelling games. Well, one compelling game.

I gave you my thoughts earlier this week. I get excitable when it comes to football.

Louisville outplayed UConn in every phase of the game, except for the crucial "Don't gift the other team a touchdown when you're leading by less than a touchdown with less than 4:00 left" phase. Everybody always overlooks that one.

Friday was yet another "Edsall special," which is any game where UConn inexplicably wins despite not moving the ball consistently or playing good defense. I'd hate UConn if I didn't go here. They suck.

Yeah, so UConn's 5-0, they're missing Tyler Lorenzen and Steve Brouse (STEVE BROUSE!), but they now apparently can win on the road. Color me excited. Donald Brown is all kinds of awesome, rushing for 190 yards.

Louisville, on the other hand, is a bit of a mystery. They appear to be a top-half Big East team. On the other hand, their coach thinks that McDonald's hamburgers are the steak of cow-related foods. Hey, he said it.

For about three quarters, Syracuse was making Pittsburgh look like Syracuse. That ended pretty quickly.

Dave Wannstadt, who is No. 2 in the Big East Coaches Whom Their Fanbases Wish They Were Fired power poll, probably ensured his move up to No. 1 by sending Greg Robinson to his 20th loss in 22 Big East games. The football gods are truly prankster gods.

Got this note in my inbox after this game:

"Oh yeah, Cincinnati's real happy with this win. Yeah, we're just plum thrilled we beat a middle-of-the-road MAC team with a fourth-quarter field goal after losing our second-string quarterback to yet another serious injury.

You know what? You just go the hell away. You're just like those Cincinnati reporters who didn't even cover us at Big East media day last year. How about you give Mick Cronin a call and see if he talks about that Mickey Mouse program? OUR BASEBALL STADIUM IS NAMED AFTER MARGE SCHOTT! Life sucks and is unfair.

I'm not sure who those comments offend, but we at TheUConnBlog apologize profusely to those people.

The Friends of Coal Bowl! See, they're friends. And they pollute the sky in harmony! Always good when West Virginia's D-1 football entries get together. Although this is a rivalry in the sense that UConn-Yale is a rivalry in producing U.S. presidents.

Even in a game where Pat White got hurt, normally a recipe for Wannstadt-related disaster, Marshall never threatened. While he played, White was pretty accurate (17-for-21) and had a pair of touchdowns. Bill Stewart's insane quest to destroy the spread option comes ever nearer to completion.

White says he'll play this week's Big East opener against Rutgers, at least, so the Mountaineers will finally get back above .500.

Looks like the Bulls took my advice from last week. Instead of letting their overmatched opponents hang around, USF blew the Wolfpack away from the outset.

The Bulls look scary, and are a big-time favorite to crush ACC champion Duke in the Orange Bowl. You think I'm kidding - wait until I move into a new house thanks to my $10 bet on the Blue Devils in August.

This game exists solely as a reminder that Rutgers Hate Week on TheUConnBlog is just 10 days away from kicking off. It seems like it was just yesterday that we just put the finishing touches on 2006's Rutgers Hate Week (just ignore the thing about losing to Louisville, and I think it holds up pretty well).

If the Scarlet Knights can get past North Carolina A&T, Delaware State and a tough Winston-Salem State team, they should be considered MEAC favorites.

In honor of the fact that I received Season Four of the funniest current sitcom on television (second-favorite behind Arrested Development, in my humble opinion) earlier this week, I've figured out which Dunder-Mifflin characters represent which teams. Also, there's a poll listing teams in order of how good they are. It's, like, duality and stuff.

He's what's holding the office together, just as USF's sustained rise is keeping the Big East afloat. Most of the college football pundits who mock the Big East would be aight, as the kids say, if an 11-1 USF team represented the league in the BCS.

Much like Miami in the early 90's and 00's, the Bulls give a sense of legitimacy to the Big East. Just like Jim Halpert is one of the few realistic, likable characters on the show.

Tyler Hansbrough is going to be the key to this one. If Jeff Adrien can contain him in the low post, it'll leave UConn's talented forwards Curtis Kelly Stanley Robinson Nate Miles Ben Eaves super-talented freshman guard Kemba Walker with some room to work with.

Hear me out on this one. Oscar's quiet, doesn't seem to play a huge role on the series, and he gets overshadowed by even the other accountants, Angela and Rutgers. Still, you can't deny that at the end of the day, Oscar is solid, and has some of the most memorable lines on the show ("Besides having sex with men, I would say the Finer Things Club is the gayest thing about me."). And also, most people would scoff if Oscar somehow tied for the best character on the show.

OK, this is all just a cover for the fact that imagining Jonathan the Husky as the Big East's token gay mascot makes me giggle.

I know what you're thinking: being ranked this high will scare Bill Stewart into a fit of non-zone read plays. Also, the Mountaineers have beaten no one yet.

To that, I say a resounding: Meh. At least they went out and played a BCS buster and a middle-of-the-pack BCS team on the road. Unlike just about everyone else in this conference or any other. OK, I'll admit that this ranking is mostly because I could see Dwight lighting couches on fire under the slightest pretense. Dwight is also a farmer at heart, and a top-notch salesman, just as WVU has been the Big East's flagbearer more or less since the 2005-06 Sugar Bowl.Unfortunately, he seemed to break down a bit after he killed a cat belonging to long-time lover Rich Rodriguez, who then left him for obnoxious, overbearing Michigan.

They get the nod over Louisville because they didn't pull a Krags in the conference opener against Syracuse.

Pitt wins the honor of being compared to the show's main character, mostly because Michael Scott has somehow managed to keep his job for more than a decade, we are told, despite an almost total lack of understanding of how to run an office.

Also, as you can see in the photo above, there are...other, more obvious similarities.

The Cards came in to the Big East kind of like a temp; expected to do alright, but still just expected to make West Virginia's coffee. Then came 2006, when the Cards, like Ryan, ascended to the top of the ranks in the conference.

Unfortunately, those dizzying heights were far too dizzying. Louisville came crashing down in 2007 with a new coach who preached allowing Syracuse to score 38 points against them. Ryan, meanwhile, was fired for fraud. I could scrap a thesis out of this one, I swear.

Last week: W, 17-15 vs. Akron
This week: at Marshall (Friday, 8 p.m., ESPN2)
Third-string quarterback, road game against fired-up opponent on their biggest game of the year? That's a combination I don't like. Cincinnati just seems much less dangerous than they were.

Meredith is hit by a car about 45 seconds into season four; Starting QB Dustin Grutza was injured early on in the football season.

Meredith was hit in the face by a football at point-blank range later in the season; Tony Pike was hit by a football-playing man and broke his non-throwing arm a little later in Cincinnati's season.

Meredith is a promiscuous, heavy drinker; Brian Kelly is an honest, good man (and a fine coach) who I would think it wrong to libel. So see, it doesn't work on every level. But it's close.

Last week: W, 38-0 vs. Morgan State
This week: at West Virginia (Saturday, 12 p.m., ESPN+ and ESPN360.com)
I'll be watching this game and playing this song for three hours. But I swear, it's 75% because I really like West Virginia's fight song. I don't think this choice could've been more obvious. Obnoxious, full of himself, and always bragging about a shining, fleeting moment (graduation from Cornell, Louisville sucking in the second half in 2006).

Hope you like being 14-point underdogs in football games, Syracuse. West Virginia, USF, Louisville, UConn, Notre Dame are all right up that alley.

Nobody likes Toby, and it makes us laugh when he gets emasculated. The end.

Well, that's it for me and hey! There's Big East football on tonight! Watch it. Sarah Palin and Joe Biden will still be there when you get back.

I'll have the much-awaited UConn-UNC preview up Friday night. Later, y'all.