The Wall Street bailout, Joe Courtney and you.

Share All sharing options for: The Wall Street bailout, Joe Courtney and you. 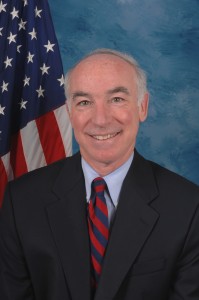 As a rule, we at TheUConnBlog.com do not spend much time covering national politics. However, seeing as economic news is currently unavoidable, we'll make an exception.

As you have almost certainly heard by now, earlier today the House of Representatives killed a $700 billion dollar Wall Street bailout bill. The net result? The Dow plunged an all time high of 778 points and about $1.2 trillion in market value was eliminated (that is $1,200,000,000 for those keeping score at home.)

Most of the blame for the bill's failure is being placed on the shoulders of House Republicans, though 95 Democrats also voted against the bill, including one representative from Connecticut. That one representative? Joe Courtney, who represents the state's 2nd Congressional District -- which includes UConn.

Courtney's full statement explaining his vote is after the jump.

"Despite the best efforts of Congressional Leaders to improve the unprecedented request from the Bush Administration for a $700 billion blank check for Wall Street, I believe the Financial Rescue Package falls short of effectively addressing America’s financial crisis. I voted against the measure today.

"I stand ready at any time to work with my colleagues to forge a better, more effective, and more responsible legislative proposal that can gain the majority support of Congress. We can and we will move beyond today’s impasse to seek a solution that makes sense for the future of our nation.

"The stubborn refusal of President Bush and Secretary Paulson to provide a meaningful solution to the home-mortgage foreclosure crisis means that the underlying cause of this financial disaster will continue unabated. I cannot in good conscience vote to borrow $700 billion in taxpayer money for a plan that does not stem the downward spiral in the real estate market, nor invest in economic stimulus that will help struggling middle class families.

"Lastly, the final round of negotiations undermined Congressional efforts to limit CEO compensation and to pay for this measure responsibly.

"My vote today does not reflect any feelings of complacency about the state of our economy; far from it. The threat to our economy and our banking and credit systems is real and it is serious. We are now facing the repercussions of yet another disaster inflicted on our nation by the recklessness and incompetence of the Bush Administration in failing to conduct oversight and regulation to protect our citizens. And we face this crisis in the context of Bush economic policies that have thrown our economy completely out of balance, and left middle class Americans to fend for themselves.

"I appreciate the valiant efforts of Democratic leaders, who demanded and won significant improvements in the original package. Unfortunately their efforts fell short in producing a measure that I -- and the taxpayers of eastern Connecticut -- could support. We now look to our next steps to further improve on this proposal."