UConn is the 24th or 23rd best team in football.

Share All sharing options for: UConn is the 24th or 23rd best team in football. 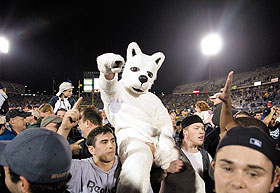 UConn football is nationally ranked for the first time this year, following a 26-21 win over Louisville on Friday. The Huskies are ranked 24th in the AP poll and 23rd in the coaches poll.

The Huskies are one of only two Big East teams that are ranked -- the other, South Florida, is 10th in both polls. No other team from the conference received a vote in either poll. UConn's next game will come against North Carolina next Saturday night. The game will be shown on ESPN2 at 7 p.m.