Share All sharing options for: State of the Big East: Week Four 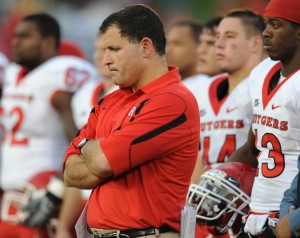 Oh, cruel Fate! How I have tempted thee!

Wherein we take a look at the conference that's electrifying crowds from the northern Mid-Atlantic to southern New England.

Welcome to this, the first UConnBlog edition of "State of the Big East," wherin yadda yadda you read the first line already. In this week's edition, we'll go through each of the eight non-conference games that went down this week. In addition, you'll also learn:

And of course, the glue that holds this whole feature together, the weekly power poll. It's all after the jump.

(Wednesday) Louisville 38, Kansas State 29: Hey, look who decided to come back from the abyss! Nice to have a decent Louisville team back. Hunter Cantwell threw for 274 yards and a pair of TDs, and Victor Anderson ran for 176 yards and 3 scores. Score wasn't really this close, as Louisville led 35-14 early in the fourth.

What's this one mean? Aside from the fact that Kansas State is yet again a huge fraud? How about the fact that this is the closest Louisville has come to the Bobby Petrino team since the Cards lost to Syracuse last year? The UL offense looked pretty unstoppable over the last three quarters, piling up 577 yards and controlling the clock for 41 minutes.

As usual, there are early-season caveats; namely, this was a Kansas State defense who faced 'tests' from North Texas and Montana State. Still, Louisville fans have to be encouraged that, perhaps, Steve Kragthorpe is not a bumbling fool.

(Thursday) Colorado 17, West Virginia 14 (OT): Luckily, just as Louisville pulled themselves out of the pit of despair, the Mountaineers trip over a burning couch and fall in. It was a comedy of errors for the formerly front-running 'Eers. It started when WVU coach Bill Stewart found out that the game operates on a clock, and not the waning and waxing of the moon, and it didn't get a whole lot better. 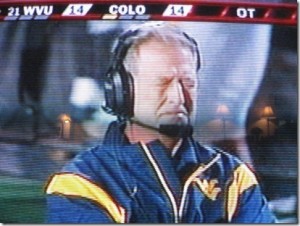 Did I lock my keys in my car? Did I just run a play in the I-formation?

Colorado QB Cody Hawkins (son of head coach Dan Hawkins) threw a pair of first-quarter touchdowns, and got a well-earned trip to the Dairy Queen on Route 10 on the ride home.

Pat White: still fast. But he got so, so little help. White ran in for a pair of TDs untouched, but WVU's offensive line opened very few holes for White and Noel Devine - the Mountaineers were 3-for-13 on 3rd down and 0-for-2 on 4th.

What's this one mean? The Bill Stewart Era is a rousing success for the other 7 teams in the Big East. The roster is similar from last year, but WVU simply doesn't have the running lanes they had last year, and maybe Noel Devine is too small. Luckily, the 'Eers should be 4-2 when they roll into a game with (gulp) Auburn on Oct. 23. If not, Mountaineer Man might have to go 'Old Yeller' (proverbial, of course) on the BS Era.

(Friday) UConn 31, Baylor 28: Donald Brown continues to be awesome, Tyler Lorenzen considerably less so, and Baylor QB Robert Griffin appears to be the truth. It was a back-and-forth, wildly entertaining game at the Rent. I have my own concerns about UConn (that's a separate post, hopefully later this week, before the Louisville preview).

Suffice to say, this game was won by either Brown's TD run with 6:00 left, or by me, from screaming the alto out of my voice (I think that's how vocal chords work). Two days later, I still can't reach the high part in this song.

What's this one mean? Either Baylor is no longer a doormat (eh, maybe) or UConn is a mediocre football team held back by a hideous passing game. When Oklahoma beats Baylor by 40 in a couple of weeks, at least we'll know that answer. UConn's got a 3-game road trip that will make or break their season coming up.

(Saturday) Pittsburgh 21, Iowa 20: See, just because the Big 10 wins most of its games against the MAC doesn't mean its teams are worth a damn. Shady McCoy ran for a 27-yard touchdown in the fourth quarter, and the Pitt D held on in the final minutes to give the scattered fans at Heinz Field something to cheer about.

So hey, maybe Pitt will make it to a bowl game this year. Good for them.

What's this one mean? That the Wannstache might be able to squeeze some wins out of his recruiting stars. Pitt could be 5-2 when they go into South Bend in late October, and beyond that, who knows? The Big East is eminently winnable, especially if QB Bill Stull can do anything to take the pressure off McCoy, who is a big-time back. 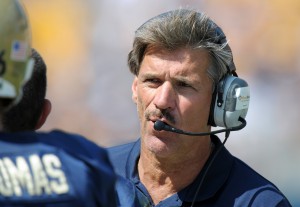 (Saturday) Syracuse 30, Northeastern 21: So what's more damning, that I'm saying "Good job, Syracuse" for beating a winless I-AA team at home by nine points, or that I'm actually sincere? Syracuse is a bad, bad, football team, folks. Unfortunately for the rest of the Big East, Greg Robinson is preparing his resume for other colleges to open up, chuckle, and toss into the garbage.

What's this one mean? Robinson's 2008 winning percentage (.250) has reached its peak. Maybe he should go out on something resembling "top."

(Saturday) Navy 23, No. 1 Rutgers 21: Oh my. As if I needed any more fuel for UConnBlog's first annual "Rutgers Hate Week (sponsored by Stevie's Hair Gel)", beginning October 12. The Scarlet Knights are 0-3 for the first time since every year of my youth.

Rutgers fans shouldn't despair, however - the season's not over yet. Big East play doesn't even start for RU until Oct. 4, and besides, the Commander-in-Chief's trophy is still very much in play (Rutgers plays Army Nov. 22).

The loss does put a big dent in Rutgers' 2009 simultaneous acceptances into the Big 10 and NFC East, and does make the Scarlet Knights a longshot to go to the BCS National Title game this year.

What's this one mean? I walk with a little more bounce in my step for the next 6 days as Rutgers sits in 8th place in the Big East.

(Saturday) South Florida 17, Florida International 9: Let's just forget this game ever happened. I mean, jeez, the Big East looks bad enough without its one legit BCS contender beating an FIU team outscored 82-10 against Kansas and Iowa. In fact, if we all just pretend the final was 67-9, it'll be for the better.

What's this one mean? So...watch any ACC games lately? Me neither.

(Saturday) Cincinnati 45, Miami (Ohio) 20: Cincinnati wins the Victory Bell, and looks pretty OK doing it, although Miami appears to be pretty bad. Tony Pike, now the starting QB after Dustin Grutza was lost for the year, was pretty damn good in his first start, going 20-for-24 for 241 yards and 3 scores.

Miami was driving to take the lead in the third before a Mike Mickens interception return spread the margin out a little bit.

What's this one mean? Cincinnati might still be a team worth considering in the muddled, 2004-four-way-tie-ish mess that is the Big East.

Looking ahead: NC State is a bit of a BCS trap, busting East Carolina's dreams last week. USF is probably the best the Big East has to offer, so no pressure, guys.

Hey, it's The Simpsons!: Pilot: "Nothing could possib-lie go wrong. Possib-ly go wrong. Heh, that's the first thing that's ever gone wrong." --So what if FIU opened a new stadium? It's a warning sign for any supposedly good team to win by one touchdown against the toothless Panthers.

Looking ahead: Well, once again the nation will be watching, and the Cards will be reinvigorated and out for revenge. Larry Taylor ain't walking through that door.

Hey, it's The Simpsons!: Willie: "Willie hears ya. Willie don't care." --Yeah, UConn's 4-0. Beat somebody good, or beat somebody well, and the nation will take note.

Hey, it's The Simpsons!: Bart: "Looks like we're experiencing some blowback from the wig offensive."
Homer: It's time to hit him where he lives.
Bart: His house? -- Yeah, there's still some bad feelings from the Unfair-Catch-But-Really-UL-Lost-Because-They-Couldn't-Hold-A-10-Point-Lead-In-The-Fourth-Quarter Game.

Looking ahead: I have an irrationally high opinion of Cincinnati football, mostly because I've seen Brian Kelly's squad physically dominate UConn. If Tony Pike gives them anything from the QB spot, this is going to be a tough out for everyone.

Looking ahead: Don't worry: Pitt's probable thumping of the Orange will be balanced out by its eventual beatdown at the hands of South Florida next Thursday.

Hey, it's The Simpsons!: Luanne: "Okay, Kirk, I'll tell a story. It's about a man whose father-in-law gave him a sweet job as manager of a cracker factory."
Homer: Bo-ring.
Luanne: A man whose complete lack of business sense and managerial impotence...
Homer: Ooh, here we go!
Luanne: ...sent the number one cracker factory in town into a tie for sixth with "TableTime" and "Allied Biscuit." --Wow, I did it. I summed up the Wannstedt Era in one pithy quote.

Looking ahead: Hey, you're still not worse than the other two teams, Mountaineers! WVU should win the West Virginia State Championship, but man, oh, man, they are going to have to shape up. On the plus side, at least both losses have come to decent teams on the road. Memo to Bill Stewart: the burning couch is now a metaphor, instead of a real thing.

Hey, it's The Simpsons!: Homer: "Hey, he lied to us through song! I hate when people do that!" --for losing the John Denver Bowl to "Rocky Mountain High" Colorado.

Looking ahead: Hey, I have some fun with the Scarlet Knights, but I'm convinced there is a Division I-A team they could beat. I just don't know who they are yet. Although if Morgan State wins that game next week, I'd be willing to convert to a religion of readers' choosing.

Looking ahead: Congratulations: Syracuse is a third-place team in the CAA North.

Hey, it's The Simpsons!:

Homer:Marge? Kids? Everything's going to be just fine. Now go upstairs, and pack your bags...we're going to start a new life...under the sea.
Marge: Homer, that's your solution to everything: to move under the sea. It's not going to happen!

--how I imagine the meeting between Greg Robinson and Syracuse officials will go in, oh, about 10 weeks.

See you in a few.