Baylor University is a bit of an unknown.

Now, we in Connecticut know that the school is a small, private Baptist university in Waco, Texas.

But for those of us who haven't seen the Bears play on the gridiron, what can we expect? This is why we have beat reporters. They are the conduits of information to the masses.

And in that respect, perhaps there is no one more important to UConn fans this week than David Lanice of Big12Conference.com.

Never heard of him? Me neither, until earlier this week.

But David did UConn fans a great service by asking the tough questions. In fact, his question was so tough, Big 12 officials cut him off immediately.

But he dug to get the real truth that would help UConn fans understand this new, unknown opponent:

"I was just wondering, uh, if you know of, uh, any members of your team that have, uh, Big 12s that they smack each other around in the shower and have sword fights?"

Alas, Baylor coach Art Briles dodged the question. Maybe we'll never know the true answer. What we do know is that Briles ran a gamut of human emotions in about six seconds -- from bewilderment to amusement to disgust to "Oh, God, end this now." Really quite impressive.

And lately, the Bears have been exhibiting all those emotions on the field.

-Disgust, in the form of a 41-13 home loss to Wake Forest in the opener;
-Amusement, that Northwestern State thought it would stay within 45 points;
-"Oh God, end it now", although that was more from the Washington State side of things.

Wazzu appears to be the Syracuse of the Pac-10, so it's unclear how much we can draw from Baylor's weather-affected, 45-17 win last Friday.

But the Baylor faithful have some hope for the first time in, well, forever. Keep in mind, this is a program whose glory days include a couple appearances in the Bluebonnet and Liberty bowls in the mid-80s.

New head coach Art Briles is a proven winner. He was 172-42-4 as a high school head coach in Texas; at the University of Houston, Briles brought a dead-end program from 0-11 to 10-3 in three years. And there's no telling how many world-champion shower-fencing teams the Cougs may have had.

Now at Baylor, Briles has some weapons to fool around with. Chief among them, Baylor's No. 1 at epee if you will, is freshman quarterback Robert Griffin. 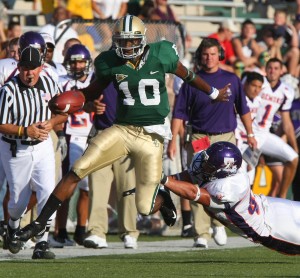 Though admittedly against a pair of cupcakes and the Meineke Car Care Bowl champ, Griffin has been a revelation:

As a runner, the 6-foot-3, 200-pound Griffin is putting up Pat White-ish numbers, averaging 9.0 yards per carry with 4 touchdowns on 32 carries. Through the first three games last year (also a 2-1 start, with a loss to TCU, and wins over Rice and Texas State), Baylor rushed for a total of 177 yards on 70 carries (2.5 yards per carry).

Halfback Jay Finley has also eclipsed that mark, to the tune of 8.3 ypc. Combined with a run defense allowing just 2.4 ypc, and it seems the Bears have been diligently working on running the ball and stopping the run.

As a passer, well, Griffin is putting up Pat White-style numbers. He's 33-for-53 for 548 yards (181 per game) with 4 TDs and 0 INTs. That's been more than enough so far, though of course the numbers are inflated with a near-perfect performance against I-AA Northwestern State.

At worst, Baylor looks like a much-improved team from last year's dreadful squad which were riposted repeatedly, and with great ease in the Big 12 (the Bears were outscored 44-13 in conference play).

Whether the Bears are actually good, or if it's all just a mirage, will be clear very quickly.

As it is, the match-ups and circumstances seem to point to a UConn victory, but of course anything can happen. The Huskies will have to be 'en garde' if they want to 'foil' the Bears. Sabre.

For the Huskies come in with one of the most stout defenses in the country. So far, opponents have rushed for fewer yards in three games (199) than Donald Brown did against an overmatched Virginia team last week (206).

UConn's longest run against came on a 19-yard run on a scramble by Temple QB Adam DiMichele. The Huskies, in true Randy Edsall fashion, attack the ballcarrier and make good tackles.

Of course, if there's one weakness UConn will have to contend with, it's a running quarterback.

I would expect that Baylor would try to spread the field and run around UConn's big defensive line. It'll be on Griffin's shoulders to make big plays. Aside from the obvious problems Griffin's athleticism poses as a runner, there are also some questions here about UConn's pass defense.

The Huskies have allowed just 55 percent of passes to be completions, although that is depressed by playing 1) Hofstra and 2) Temple in a monsoon. And even in a monsoon, the UConn DBs got beat on a 46-yard bomb on the third play of the game.

The X-factor, of course, is the home crowd. Rentschler Field always seems to be electric for night games, when (I suppose) there's more time in the afternoon to tailgate, and thus most everyone is in the stadium by kickoff. I expect this to be the case once again. UConn is 27-8 all-time at the Rent, and 20-2 against non-Big East opponents since 2003.

COMBAT, OF THE ON-FIELD VARIETY:
UCONN OFFENSE v. BAYLOR DEFENSE
Donald Brown, who has been playing Happy Fun Ball for the last three weeks, should face his toughest test to date. Even Wake Forest, which plays a similar grind-it-out style to UConn, managed just 3.5 yards per rush.

Now, the Huskies' offensive line has been dominating in three games, willing UConn to the win over Temple and a 28-0 first half against UVa. This will be something of a proving ground - not that Baylor's DL (featuring a couple of 300-plus pound tackles) is good, per se. But UConn hasn't faced a d-line capable of putting up any resistance.

What this means is that it may come down to Tyler Lorenzen having to win the game with his arm (and legs). I suppose that, theoretically, it's possible for that to happen. Baylor did allow Riley Skinner to go 27-for-36 for 220 and 3 TDs, and those are Lorenzen-like numbers.

Caveats aside, I don't see Baylor being the first to stop the Donald Brown Pain Train.
Edge:
UConn.

UCONN DEFENSE v. BAYLOR OFFENSE
UConn's defense is historically very sound. But this could turn out to be a Matt Grothe-in-2007 performance by Griffin. Grothe pretty much was USF's entire offense, it just wasn't enough last October at the Rent.

Griffin is a lot like Grothe with fewer weapons around him. He'll keep the Bears competitive in this game, and in the Big 12, but he can't do everything.

The ballhawking, bend-but-don't break UConn defense from 2007 seems to be back in force, with about as solid a front seven as there is in the Big East.
Edge:
UConn, slightly.

COACHING AND SPECIAL TEAMS
UConn's kick coverage last week was the only blemish on a near-perfect win against a bad Virginia team. And Tony Ciaravino just now got back to 50 percent on kicks (3-for-6, 2-for-5 in the Temple rains). Baylor averages just 22 yards per kick return,

Edsall's teams are historically disciplined and beat the teams they should beat. Briles is an up-and-coming coach who has the program on the right track.
Edge:
UConn, again slightly.

IS YOUR TOWN BETTER THAN STORRS?
Baylor is located in Waco, deep in the heart of central Texas. Waco is a very nice city of 120,000 (thanks for the correction, WacoProud) residents, all of whom wish David Koresh never existed.

I've never been to Texas, so I can't properly score this category. Nor can I make FBI/"burning down the house" jokes because, let's face it, Waco residents have probably heard them all by now. Plus, the South Park-mandated 22.3 years for tragedy to turn funny has not passed.

Baylor -- Daniel Sepulveda, P, Pittsburgh Steelers (4th round, 2007)
UConn -- Tyvon Branch, CB, Oakland Raiders (4th round, 2008)
Edge:
I mean, technically, Sepulveda's a starter, so it should go to Baylor. But he's a punter. He's also out for the year with an ACL injury. So nyah.

Baylor does have arguably the best athlete alumnus from either school: 1996 Olympic double gold-medalist sprinter Michael Johnson graduated with a degree in Business in 1990.
Edge:
Even.

Homeriffic Prediction of the Week:
Baylor has early success by stacking eight men in the box, and perhaps gets a big play from Griffin to throw a scare into the Huskies.

But: Lorenzen stretches the field the Rob Ambrose-mandated one time, Donald Brown gets more and more room, and the Huskies' depth wears out the Bears.