Want to get into Gampel this year? Check out the new ticket policy.

Share All sharing options for: Want to get into Gampel this year? Check out the new ticket policy. 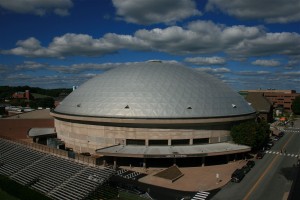 Today, UConn announced that it will once again use an online lottery system to sell men's basketball student season tickets. The program, which requires students to register online, has received a slight makeover, but is very similar to the method used last year.

Students on the Storrs campus are given special weight in the lottery, with seniors having the best chance to win. Seniors are entered into the lottery program five times, Juniors receive four entries and Sophomores have three. Freshmen and Graduate Students on the Storrs campus will be entered into the program twice. All other students, including those on regional campuses, law, medical and dental students will be entered once.

More information, including dates and changes to this years system, is listed after the jump.

There are two changes to this year's system. The first, which is relatively minor, gives more weight in the lottery to Graduate Students on the Storrs campus. The second, and arguably more important change affects the actual sale of tickets. In 2007, it took several lotteries for the entire allotment of tickets to be sold. This year, after the initial lottery winners have a chance to buy tickets, all remaining tickets will be sold on a first come first serve basis.

The dates for the system:

October 2-6 -- Lottery winners can purchase tickets. The first 1,000 ticket packages sold for the XL Center will be for the lower level. (2,500 student tickets are available in Gampel, women's basketball tickets go on sale at the same time.)

October 7 -- All remaining tickets go on sale at 10 p.m. on a first-come, first-serve basis.

All in all, it seems UConn has finally found a formula that is headed in the right direction. It is not perfect, something Executive Associate Director of Athletics Neal Eskin acknowledged, but for the most part, it is well designed.

"Not every process will be appealing to every single student," Eskin said, and he is undoubtedly right. However, he stressed that the school wanted to create a system that is "Safe, easy and convenient, and fair." In that aim, UConn has succeeded.

Of particular note is the new open sale period, which will surely have many of the most "hardcore" fans waiting by their computers on October 7. This small change, allows die-hard fans to greatly increase their chance of getting tickets and was the best move UConn could have made, especially considering the circumstances and troublesome history of ticket sales.

Certainly, there is still room for improvement. More than anything else a "turn-back" mechanism that allows students to return tickets they won't use (especially for games played over winter break) needs to be put into place. Eskin said the feasibility of such a system had been discussed with USG, and that is to USG's credit. It does not matter if the system falls under the student government or the athletic department, it would be an incredible value to students and would likely help fill the all-too-often empty rows of seats in Gampel Pavilion and the XL Center.