Getting in this crowd is not easy. Check out the troubled history of UConn basketball ticket sales.

Share All sharing options for: Getting in this crowd is not easy. Check out the troubled history of UConn basketball ticket sales. 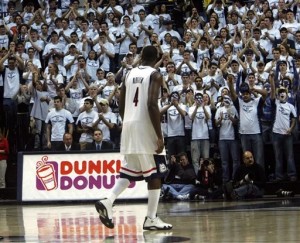 UConn announced today that once again it will sell basketball tickets to students through an online lottery. It has not always been this way though. In fact, the sale of tickets at UConn has a recent history that has been tumultuous at best. Massive crowds, constant cutting, rampant cheating and even a hurricane have led up to today's system.

Want to find out how? Check out the history after the jump.

Pre-2005: UConn used the world's simplest system for doling out tickets -- first-come, first-serve. Students lined up, camped out next to Gampel Pavilion in the early fall and then bought their tickets.

So what went wrong? Two things. First, there were often accusations of cutting in line, with people claiming they fell asleep outside of Gampel ready to get tickets and waking up the next morning to find that the line had "magically" grew overnight. Secondly, and most damningly, the remains of Hurricane Ivan hit UConn in 2004 as students camped out for tickets. The sight of sick, drenched students helped to end the campout forever. Also lost was a chance for students to interact with members of the basketball team, who would often visit the line during the night.

2005: The first year after Ivan's landing led UConn to a hybrid system. No longer would any student have to spend the night outside to obtain tickets, but they would still have to line-up to get them. Students were told they could begin to line up at 2 p.m. on a Friday afternoon and at some unannounced time later in the day, wrist bands allowing students to return and buy tickets the next day would be given out.

What went wrong this time? First, students were told not to line up until 2 p.m., but they showed up anyway and began to "mill around in the exact order they arrived." That resulted in a line of thousands of people that stretched from the ticket office past Gampel by the time 2 p.m. rolled around, and many who didn't arrive until 2 p.m. were shut out. Second, although the original plan called for wristbands to be distributed at an unannounced time, the school gave them out at exactly 2 p.m. in an attempt to disperse the massive line. The result was a mad crush of people as many in the back of the line ran forward, creating a large mob in front of Gampel.

2006: Sick of the problems with lines, UConn created a new system. Now, students would have to head to Gampel in the week of ticket sales to select a numbered and colored wristband. Then, a lottery would determine which wristband holders would be able to return to get tickets.

What went wrong this time? Students were limited to one wristband and required to keep it on until ticket sales, however, anyone with a thumbtack and a little patience could bend the plastic lock on the band, freeing themselves to hop back in line and grab all the colors of the rainbow. Students had to pass a "tug-test" to buy tickets and if their wristband fell off (meaning it had been tampered with), they would be kicked out of line. This caught some cheaters, but not them all.

2007: UConn finally adopted a pure online lottery system. Students registered online to buy tickets and were given a better chance to win based on class-standing (seniors had the best shot, then juniors and so on.) The system has been tweaked slightly this year, but by and large, it is the system that will be used for 2008.