UConn isn't a Top-25 Public University anymore. Does it matter?

Share All sharing options for: UConn isn't a Top-25 Public University anymore. Does it matter? 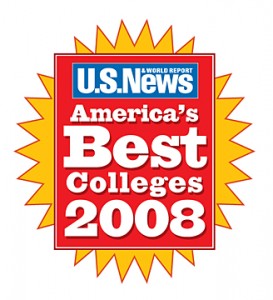 The annual U.S. News and World Report college rankings were released a few weeks ago, and UConn took a slight tumble. The school is now ranked as the 66th-best National University, down from 64 a year ago, and more significantly, it dropped out of the Top-25 Public Universities, slipping from 24 to 26.

Though neither drop is large numerically, falling out of the Top 25 means a lot symbolically. UConn went out of its way to promote and brand the school as a Top-25 institution (and in some cases still is doing so, check out this "Points of Pride" piece on the Future Students page of UConn's website.)

But does the drop really matter? And what does UConn President Michael Hogan think? Find out after the jump.

In short, the drop's only impact is taking away a talking point from UConn. The rankings are a valuable measure of success, but they are by in no way a perfect instrument. They are often criticized and rely in large part on the perception of a school.

In an e-mail to TheUConnBlog.com, Hogan said he was "disappointed" in the rankings, but was excited about UConn's future prospects. He is right. Several important indicators such as graduation rate, student retention, and average SAT scores, show UConn's improvement in recent years. At their next meeting, the Board of Trustees will discuss a new academic plan that aims to propel UConn into the Top 20 in five years. Among other things, the plan calls for enhancing the Honors Program and examining Graduate-level education, focusing on area's where UConn is in the top-tier. Dolan Evanovich, the vice-provost for enrollment management called the goal of reaching the Top 20 by 2013 "doable."

UConn's main hurdle is what U.S. News and World Report calls its "Peer Assessment," this grade, which accounts for 25 percent of a school's total score, could hold the school back more than anything. It is based on a survey of university presidents, provosts and deans of admissions, and here is where reputation can play a big role. UConn received a 3.1/5 this year, down from a 3.2 last year. Because of the weighting, even a small jump in that number can make a big difference. According to Evanovich, if you remove that from the rankings, UConn jumps 10 spots. "Our reputation hasn't caught up to where we are," he said.

Building a reputation takes time, effort and money -- especially when the people you have to convince are other college presidents -- but UConn at least appears to be on the right track. Attracting better students (with a better Honors program) and building better graduate programs will only help. If the state continues to support UConn (and avoids large budget rescissions) the goal will only become more feasible. It will not be easy, but with time and success, the score will rise.

The ranking stings UConn only because it drops it out of the Top 25. It is reason for the university to take notice, but not reason to worry, within a few years, its likely the conversation might be very different.