President Hogan On UConn falling out of the Top 25.

Share All sharing options for: President Hogan On UConn falling out of the Top 25. 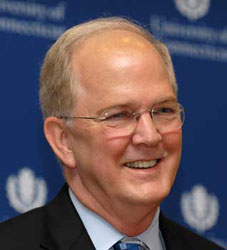 UConn President Michael Hogan e-mailed us about UConn's drop in the newest U.S. News and World Report rankings, his reply to TheUConnBlog.com is reprinted after the jump.

"We should always be concerned about our standing vis-à-vis other universities. The US News rankings are controversial - they don't measure everything that's important to us - like diversity or the quality of our laboratories, studios, and classrooms. Yet, many of the things they do measure - student preparedness, as well as graduation rates and retention rates - are very important to us.

"So, this said, I was disappointed to see us fall a place in the rankings (because of the way ties affect ranking, the change reflects one position). Yet, I also know that we already began putting into place new policies and practices last Fall when I arrived at UConn to advance in areas like student preparedness (as measured by our entering students' SAT scores and percent of entering students who were in the top-10% of their high school class) and graduation/retention rates. I'm pleased that we just received the data on some of these areas for the current year and have already improved substantially. For instance, our average SAT score is up by 8 points over last year!

"Consequently, while we experienced a small setback in this year's US News ranking report, I know this does not reflect a reversal in UConn's rise toward excellence, because we are improving so much on key metrics that we care about. And, we remain the top-ranked public university in New England. Improving in the areas important to us is not always easy - we need to carefully channel our resources toward those areas, through initiatives like maintaining strong financial aid programs for the students we hope to attract, strong honors programs, and efforts directed at recruiting underrepresented students. We are committed to doing these things and advancing the quality of our university."